The 2022 WrestleMania Backlash is the upcoming 17th Backlash professional wrestling live event produced by WWE. It will be held for wrestlers from the promotion's Raw and SmackDown brand divisions. The event will air on pay-per-view (PPV) worldwide and will be available to stream through Peacock in the United States and the WWE Network internationally. It is scheduled to take place on May 8, 2022, at the Dunkin' Donuts Center in Providence, Rhode Island. It will be the second Backlash held under this name after the previous year's event, thus officially renaming the event series as WrestleMania Backlash. It will also be the third Backlash held at Dunkin' Donuts Center after the 1999 and 2009 editions. The concept of the event will be based around the backlash from WrestleMania 38.

Backlash is a recurring event that was established by WWE in 1999. It was held annually from 1999 to 2009. Backlash was discontinued after 2009 but reinstated in 2016 and has been held every year since, except in 2019. The original concept of the event was based around the backlash from WWE's flagship event, WrestleMania. The events from 2016 to 2018 and in 2020 did not carry this theme; however, the 2021 event returned to this original concept and was named "WrestleMania Backlash". The 2022 event was also confirmed to be held under this name, thus renaming the event series to WrestleMania Backlash. It will be the 17th event in the Backlash chronology and will feature the backlash from WrestleMania 38. It is scheduled to take place on May 8, 2022, at the Dunkin' Donuts Center in Providence, Rhode Island and will feature wrestlers from the Raw and SmackDown brands. It will air on pay-per-view (PPV) worldwide and the streaming services Peacock in the United States and the WWE Network in international markets. The official theme song for the event is "Dangerous" by Set It Off.

The event will include matches that result from scripted storylines, where wrestlers portray heroes, villains, or less distinguishable characters in scripted events that build tension and culminate in a wrestling match or series of matches. Results are predetermined by WWE's writers on the Raw and SmackDown brands, while storylines are produced on WWE's weekly television shows, Monday Night Raw and Friday Night SmackDown.

At WrestleMania 38, Charlotte Flair defeated Ronda Rousey to retain the SmackDown Women's Championship. During the match, Flair had tapped out to Rousey's armbar, but the referee was incapacitated and Flair was able to get a cheap win after the referee came to. On the following episode of SmackDown, Rousey, who wanted a rematch with a clear winner, challenged Flair to an "I Quit" match. Flair refused and told Rousey to get to the back of the line. Despite this, the championship rematch was subsequently granted and scheduled for WrestleMania Backlash.

At WrestleMania 38, former All Elite Wrestling wrestler Cody Rhodes made his return to WWE after six years as Seth "Freakin" Rollins' surprise opponent, where Rhodes was victorious. On the April 11 episode of Raw, Rollins claimed that he was at an unfair disadvantage since he did not know who he was facing beforehand. Rollins said that on an even playing field, he would defeat Rhodes and challenged him to a rematch, which Rhodes accepted and thus was scheduled for WrestleMania Backlash.

At WrestleMania 38, SmackDown's Universal Champion Roman Reigns defeated Raw's WWE Champion Brock Lesnar in a Winner Takes All match to claim both titles and become recognized as the "Undisputed WWE Universal Champion". On the following episode of SmackDown, Reigns said he had nothing left to prove; however, he wanted his cousins, the SmackDown Tag Team Champions The Usos (Jey Uso and Jimmy Uso), to replicate his feat by winning the Raw Tag Team Championship to bring more gold to The Bloodline. The Usos appeared on Raw the following week to issue a challenge to the Raw Tag Team Champions, RK-Bro (Randy Orton and Riddle), who accepted and the match was made official as a Winners Take All championship unification match at WrestleMania Backlash.

After Edge defeated AJ Styles at WrestleMania 38 with assistance by Damian Priest, the two formed an alliance. The fallout between Edge alongside Priest and AJ Styles perpetuated and subsequently, Edge was scheduled to face Styles in a rematch at WrestleMania Backlash. 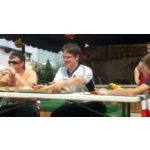